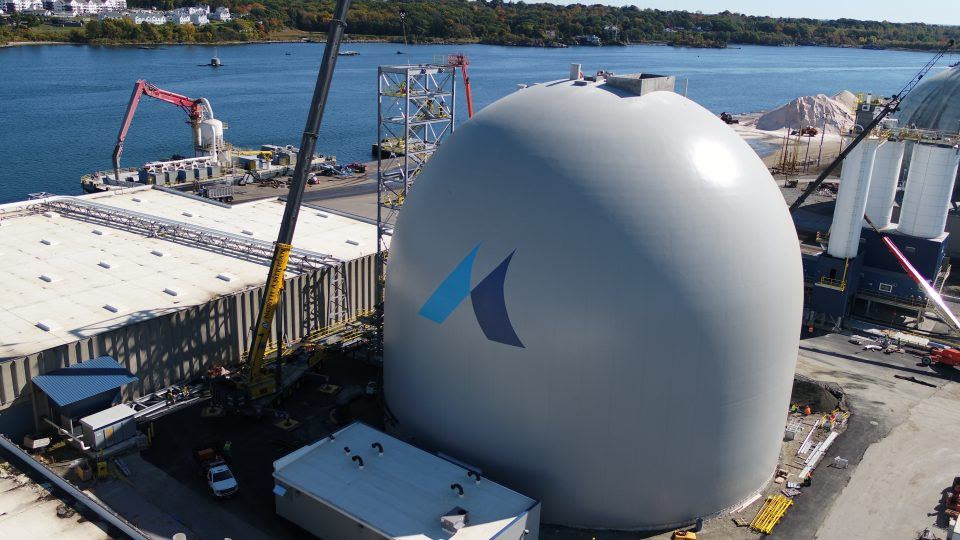 The McInnis Cement project summary is now live at this link.

Dome Technology recently completed two projects for McInnis. As part of its efforts to grow business, McInnis built a facility in Providence, Rhode Island, and after two years in operation, the company was ready for an upgrade featuring a new DomeSilo for cement storage that would supplement existing flat storage.

“The initial 30,000-ton flat-storage warehouse has been very functional, and it will continue to be used in conjunction with the new storage dome. However, the dome storage was selected for the expansion because the warehouse operations had various limitations. While reclaiming from, it was difficult to offload a ship in a timely fashion,” said project director Dominic Demers, adding that unloading would often pause for 10 to 12 hours a day during warehouse reclaim operations. “For phase two, we wanted to combine operation flexibility and maximum utilization of our growing marine fleet.”

Dome Technology completed construction in 2019. The DomeSilo is 134 feet in diameter with a storage capacity of 40,000 metric tons. To maximize the terminal’s abilities, McInnis selected a barge unloader rated at an aggressive 800 metric tons per hour.

While Dome Technology worked on the Rhode Island project, McInnis called with an unrelated question: Could Dome Technology also install an additional truck loadout lane at an existing terminal in The Bronx, New York?

More details on the Bronx project will be published in our Articles & News section next week. See more of our industrial project summaries by visiting our Industrial Projects page.