The importance of strength: BSA Cementos selected a dome for its new clinker facility in Santiago, Chile. What makes Dome Technology’s model seismic resistant and capable of storing more product in a smaller footprint

When a company operates in a part of the world where Mother Nature can be unruly, the strength of the storage is just as important as storage capacity itself. If the structure can’t withstand nature’s worst, the product inside just isn’t secure.

Such was the concern BSA Cementos faced when planning for new clinker storage. The company needed to store an additional 50,000 metric tons, but with the next earthquake not being a matter of if, but when, company management sought storage that could withstand the seismic activity typical of the region. 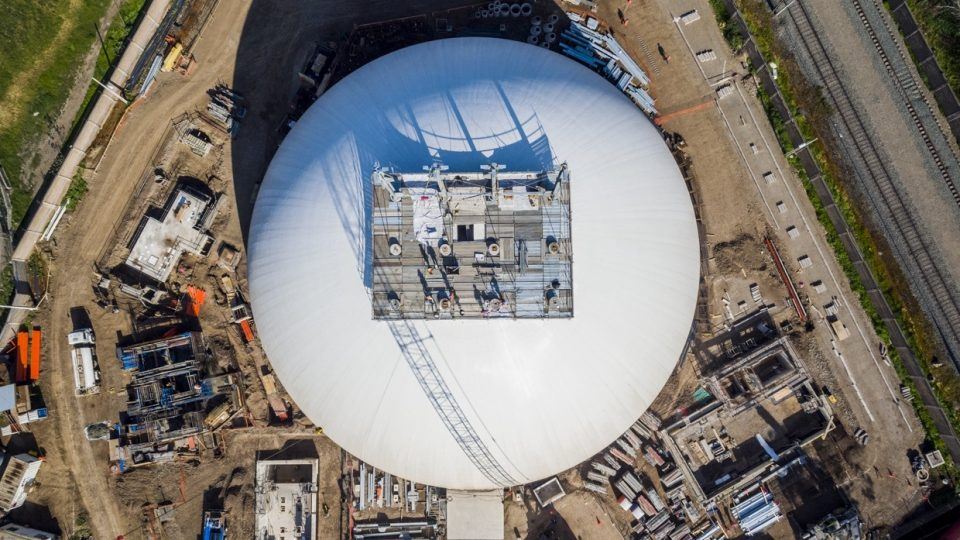 In 2016, with support from Coppex Engineering & Technologies in securing the deal, Dome Technology was contracted to build a reinforced-concrete storage dome that holds up to 50,000 metric tons of clinker and stands 28.5 meters (93.5 ft) high and 57 meters (187 ft) in diameter.

The dome is located at a new site where BSA Cementos could increase its production by 950,000 tons per year during the first stage of operation, with as much as 1,900,000 tons a year being processed per year.

Seismic activity is common in Chile, which led the country to adopt some of the most rigorous building codes in construction. And if BSA was going to build a storage facility, earthquake resistance was extremely important, said Luis Riveros Grove, who oversaw quality control for the project. “Chile is a seismic country, so it is taken very seriously, both to protect the build but much more importantly the safety of the plant operators,” he said.

The dome will allow BSA Cementos to store 50,000 metric tons of clinker in case of a shipping delay. The plant is expected to have a continuous supply of clinker from the port for their production, and the dome will serve as reserve storage so that if supply is interrupted from the port, they have plenty to continue operating.

Domes are a choice option in areas prone to seismic activity because a seamless shell makes it possible for a dome to withstand differential movement at the base.

A dome is able to meet and in some cases exceed Chile’s building codes, thanks to geometry. According to engineer for Dome Technology Doug Weber, a dome has the ability to distribute a given load in two directions, resulting in twice the strength of a single curved wall like that in a traditional silo. A seamless shell, comprised of reinforced concrete combined with the double curvature, makes it possible for a dome to more economically withstand given seismic forces and differential movement at its base.

For these reasons, domes are also frequently built as safe shelters based on their tolerance fornatural disaster. A dome can be engineered to withstand winds exceeding 250 mph (which includes EF5 tornadoes). Domes can be built to meet ICC-500 specifications.

A dome is made more robust based on construction materials. The exterior airform acts as an impermeable membrane that keeps moisture at bay. The steel-reinforced concrete shell provides insulation and climate control inside. Combined with steel reinforcement and nature’s perfectly strong shape, domes are well-suited for weathering any storm.

At sites where settlement is a concern, domes can be designed to tolerate some movement; however, there may be other solutions besides deep (and expensive) foundations. Dome Technology helps customers explore options that may reduce costs while delivering necessary support at the base.

At the BSA Cementos site, a substantial headhouse placed at the dome’s apex houses large equipment, conveyors and dust-control systems, weight that can be supported since the dome was designed to handle this type of load, no matter what nature throws at it. The dome has plenty of strength to handle the loads and stress other structures can’t, even in a seismic event.

To drop costs and aid in economics, material handling was kept simple: A conveyor running through the apex fills the dome with product, and a front-end loader unloads the clinker through a main door. Relying on loaders used for other factory functions means less equipment downtime and should be sufficient since stock rotation inside the dome will be minimal.

Editor’s note: This is an excerpt from a feature published in the 2018 issue of BMHR, a supplement to World Cement.